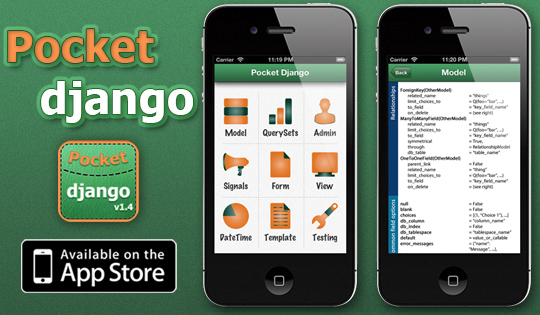 Django is an open source Web 2.0 application framework, written in

Pocket Django provides a quick reference (cheat sheet) for django developers. It covers topics you have already learned but need a few reminders or guidance on.

During the database modelling of a web application that I was building with the django framework, I realised that I need a quick way to find out what parameters should I place in each class. I managed to find an iOS app on the App Store that was providing such information but most of its content was deprecated because it was created some time ago for an old version of django.

This factors determined me to create my own reference tool. I though why not create it as an iPhone application for the App Store Market and solve in the same time myself and the users which from now on do not have to buy the App with the deprecated content.

Developed the project starting with collecting reference data for the django framework, organizing it and prototyping the app user interface. The next stage involved implementing the content into a native iOS App and the distribution to the App Store market, after considering a SEO strategy.

The most challenging part of this project was that for targeting more users, I needed to developed the App for the iPhone SDK 4.3. Meaning that I had to manually create the user interfaces and perform the memory management as iOS SDKs prior to the 5th version do not support Storyboards and Automatic Reference Counting (ARC).

After publishing the application, 2 units were sold in the first 12 hours and the first review (5*) was given after 2 days. Considering the fact that this is my first application on the App Store, I call it a Success.